Roi Partridge (1888-1984) was an American etcher, engraver, and draftsman. He was born in Washington, and was pulled from public school at an early age to pursue art studies. In 1907, he began classes at the Fine Arts Institute of Kansas City.  He pursued his art education in Munich, focusing on etching under the tutelage of Brockhoff. From 1920-1954, he taught etching at Mills College, in Oakland California. In 1925, he also became the director of the Mills College Gallery, which he transformed into a hub of influential artistic talent. He was well respected as a graphic artist and landscape etcher, producing over 300 etchings from his travels. 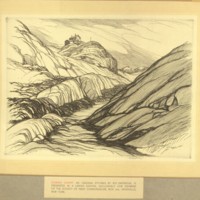