Dong Kingman (1911-2000) was an American painter of Chinese descent. He was born in California in 1911. He studied in several schools in China as well as attended the Fox Morgan Art School in California. He was known for his watercolor paintings which depicted landscapes and urban environments. During the 1930s he worked for the Works Progress Administration (WPA) as an artist and during World War II he served as an artist with the United States Army. After the war he served as an instructor at Columbia University and Hunter College. During the 1950s and 1960s he worked in the Hollywood film industry where he designed backgrounds for major motion pictures. Kingman died in 2000. 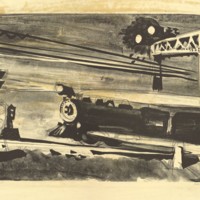