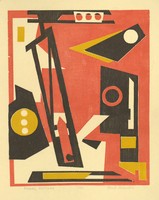 Daniel and Joan Strishock acquired this extrordinary collection of prints from a print collector in Alexandria, Virginia. Mr. Strishock says that he almost immediately recognized the value of the lot, and decided to purchase them on the spot. While working with the prints in preparation for this exhibit, the Archives staff noticed that many, but not all of the items had been distributed by print collecting clubs and societies. Print collecting clubs and societies were formed by groups of artists or patrons of the arts in an effort to promote interest in the craft of printmaking, help raise funds to support the artists and their exhibitions, and provide a means for those who might not otherwise be able to own original works of art to do so. The first society of this nature was The Apollo Association for the Promotion of the Fine Arts which was founded in New York in 1839. These clubs and societies ebbed in popularity for several decades, but experienced a revival around 1910. Many of these 20th Century clubs and societies operated on subscription base models in which members would pay a yearly membership fee and be eligable for selected prints created by a sponsored artist that were occasionally distributed. Often, bibliographical information about the artist was included with the distributed work. Not all of the pieces contained in the Strishock print collection were obtained in this fashion, but some of the clubs and societies represented include The Collectors of American Art, INC., The Associated American Artists of New York, The Society of Print Connoisseurs of Hicksville, New York, The Chicago Society of Etchers, and The Print Makers Society of California. Other items were acquired from private dealers in Paris and London. Some of the artists represented in this eclectic collection include William E. C. Morgan, Stevan Dohanos, Mariette Lydis, and Julius Lankes.