Printiss Hottel Taylor (1907-1991) was an American printmaker, specializing in lithography.  He began his career as a painter, but turned to lithography in the late 1920’s-1930’s while enrolled at the Art Students League in New York City.  Born in Washington, DC, he studied and spent his early career in New York City, where he worked closely with Langston Hughes and other members of the Harlem Renaissance. Taylor's work was included in exhibitions at the Corcoran Gallery, the Smithsonian Institution, the Baltimore Museum of Art and the Virginia Museum of Fine Arts in Richmond.  Along with teaching at American University, Taylor was elected President of the Society of Washington Printmakers. 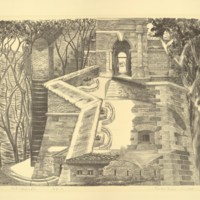