Sven Birger Sandzen (1871-1954) was a Swedish painter and print maker active in the United States. He was born in Sweden, where he studied at the Artists' League of Stockholm and then in Paris. He later immigrated to the United States and became a professor at Bethany College in Kansas. He was an artist for the W.P.A. during the 1930s and he wrote a book titled With Brush and Pencil. In addition to teaching at several colleges and universities in the mid-west and south-west, he was a founding member of the Prairie Printmakers Society. 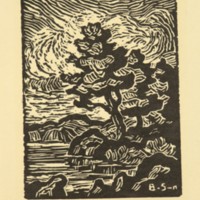