Leonard Baskin (1922-2000) was an American sculptor, illustrator, and printmaker. He was born in New Jersey in 1922. In addition to studying at local schools, he also studied in Paris and Florence. He was known for his traditionalist approach and carved in wood and stone, and modeled in clay. He also formed a private publishing company named Gehenna Press which published fine-art illustrated editions of poetry. 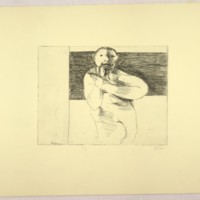