Leon Pescheret (1892-1971) was an artist, designer, and etcher. Born to French parents living in London, he immigrated to the United States in 1910. He received his education from the Art Institute of Chicago, focusing on interior design, and took contracts in interior design from 1919 until 1930. In 1926, he discovered etching, and soon thereafter devoted himself to the art. He studied at the Royal College of Engraving in London, and under the tutelage of Roger Hebbelinck. In 1936 he moved to Whitewater, Wisconsin, where he kept a studio for 31 years.  He retired to Tucson, where he died in 1971. 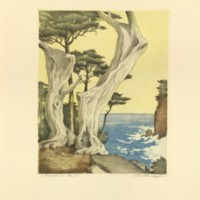