William John Heaslip (1898-1970) left his native Toronto, Canada after serving the Royal Flying Corps during WWI and made his home in New York. He was a painter, lithographer, and illustrator. His fondness for aeronautics carried into his work. He completed a series of advertising posters for the Coca-Cola Company featuring United States Army aircraft in 1943 that are currently housed at the Smithsonian Air and Space Museum. He passed away in 1970 in Morristown, New Jersey. 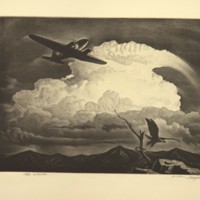