Arthur William Hall (1889 – 1981) was an American printmaker. He was born in Bowie, Texas. Hall studied at the Chicago Art Institute where he began focusing more on etching, at the encouragement of an instructor. Later in his life he settled in the Southwestern United States, where he died in 1981. 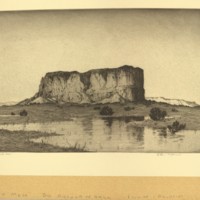