Federico Castellon (1914-1971) was an American Surrealist painter influenced by Salvador Dali. Born in Spain, he came to the United States with his family at the age of seven. He began his artistic career primarily as a painter but focused more on graphic arts such as lithography and etching after 1937. He also taught at Columbia University, the Pratt Institute, Queen's College, and the National Academy of Design.

Art of the Print
http://www.artoftheprint.com/artistpages/castellon_federico_gladiatorandthetourist.htm 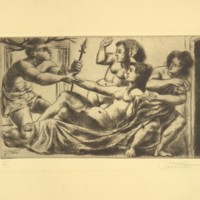