Lynd Ward (1905-1985) was an American engraver, lithographer, and illustrator. He studied fine arts at Columbia Teachers' College in New York and printmaking and book design at the National Academy of Graphic Arts in Leipzig, Germany. He created and published the first wood engraving graphic novel in the United States in 1929. He illustrated children’s books and classic works, and won several distinguished awards, including the Library of Congress Award for wood engraving and the Caldecott medal. 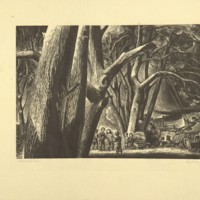